Kevin Durant injured the Knee: What is Bone Bruise?

Kevin Durant from NBA Golden State Worriers suffers from knee injury. It happened last night (2017.02.28) vs. Washington. MRI showed that Grade 2 Medial Collateral Ligament (MCL) sprain and a tibial bone bruise. He will be out indefinitely and will be evaluated in 4 weeks according to the team.

Bone bruise? It is just a bruise. The bone just got a hit so it is not a big deal, right? You may think that way. Bruise sounds not as serious as broken, tear or rupture. However, it is actually more than just a bruise. It is more painful than bruise on skin. 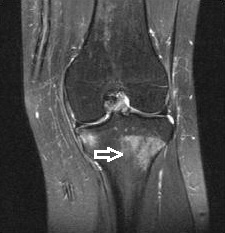 Example of bone bruise image. Not his.
photo: http://www.ehealthstar.com

Causes
Bone bruise is usually occurred that compression force is applied to the bone. It may be 1. bone to bone impact in the joint or 2. direct force to the joint from outside. Bone bruise is seen in sports such as football, soccer and basketball. It happens with sudden stop, hard landing on the floor or sudden bending of the joint. Regarding bone bruise to the knee joint, it is associated with ligamentous tear such as ACL or MCL tear. It is found with 80 % of ACL rupture and is in femur condyles or in tibial plateau.

Sings and Symptoms
Severe pain and joint swelling are commonly seen with this injury.

Diagnosis
MRI detects bone bruise. Since damage is inside of the bone, X-rays do NOT show bone bruise.

Treatment
Rest. Non weight bearing to the joint with crutches. Splinting with brace. Since bone bruise is similar to fracture, it is treated pretty much same as fracture.

Healing Time
It is commonly 6-8 weeks or more.